Dossier: The history of the guard 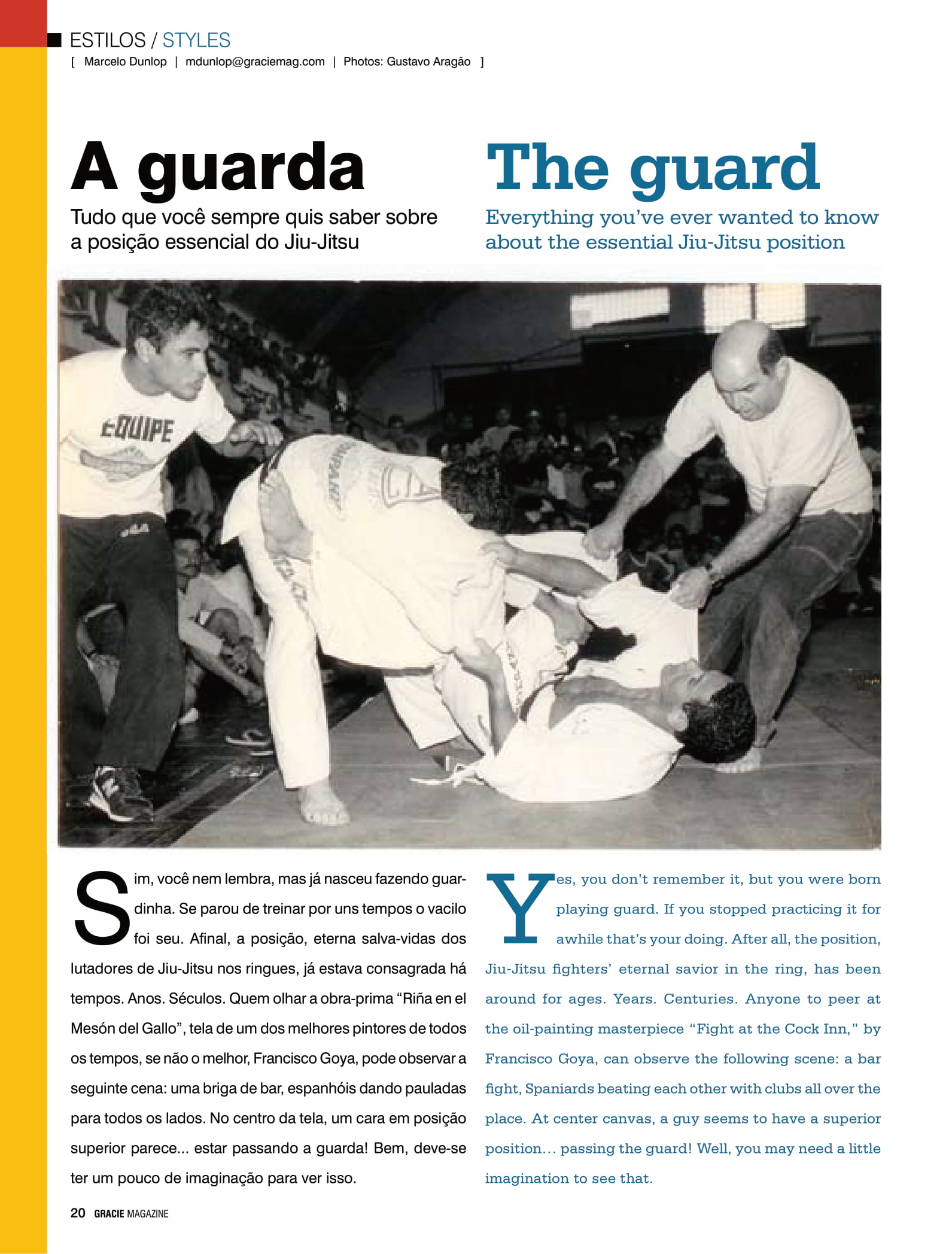 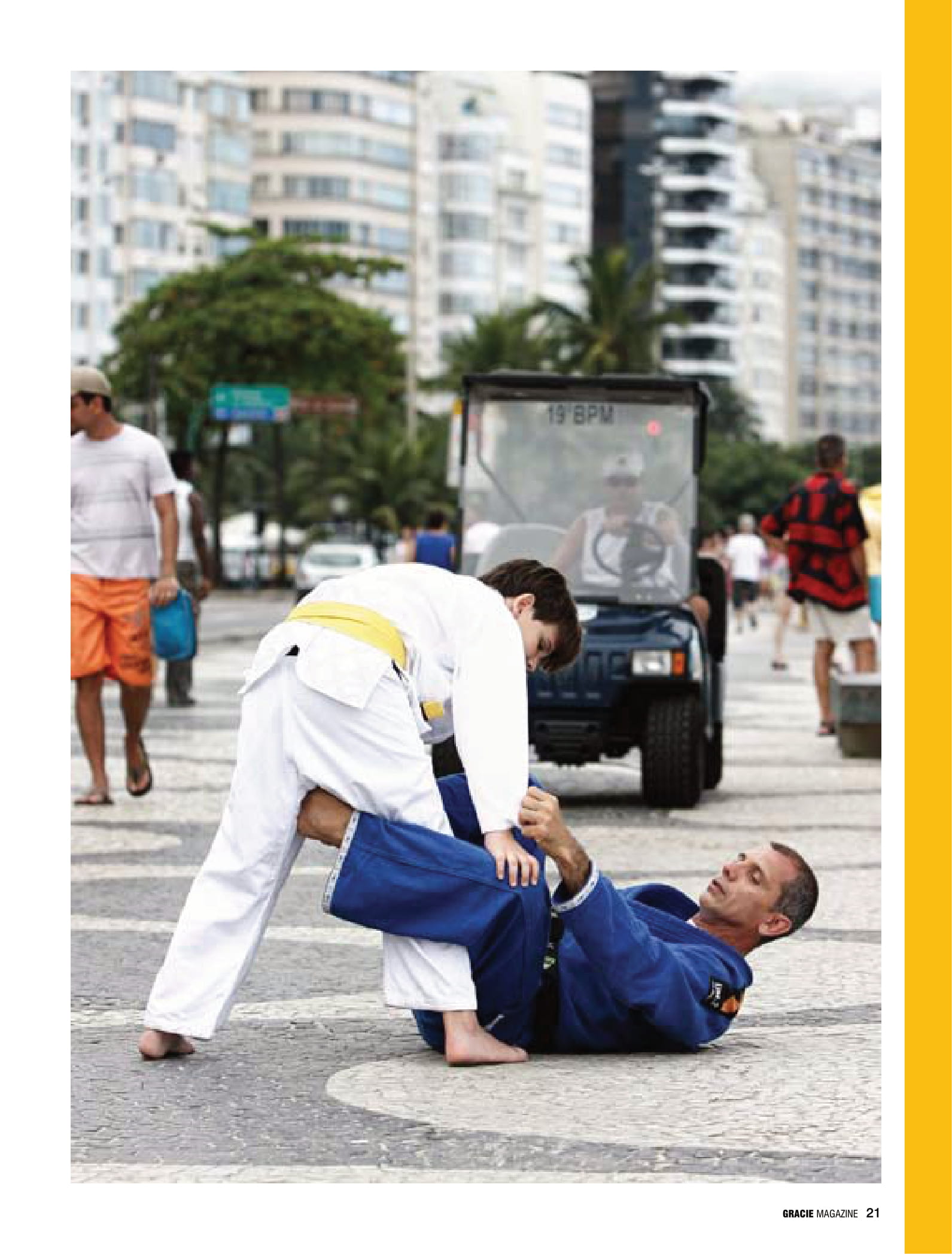 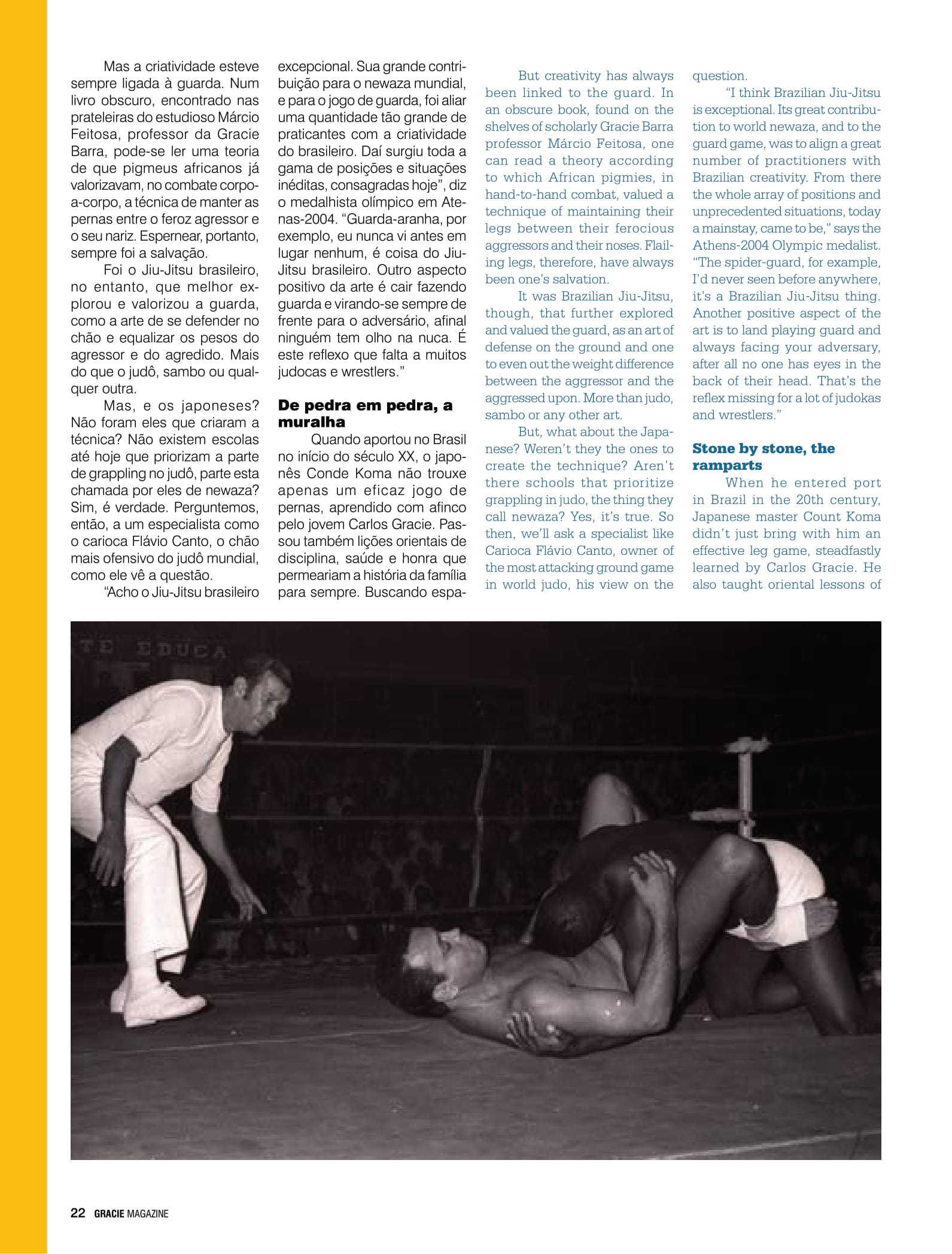 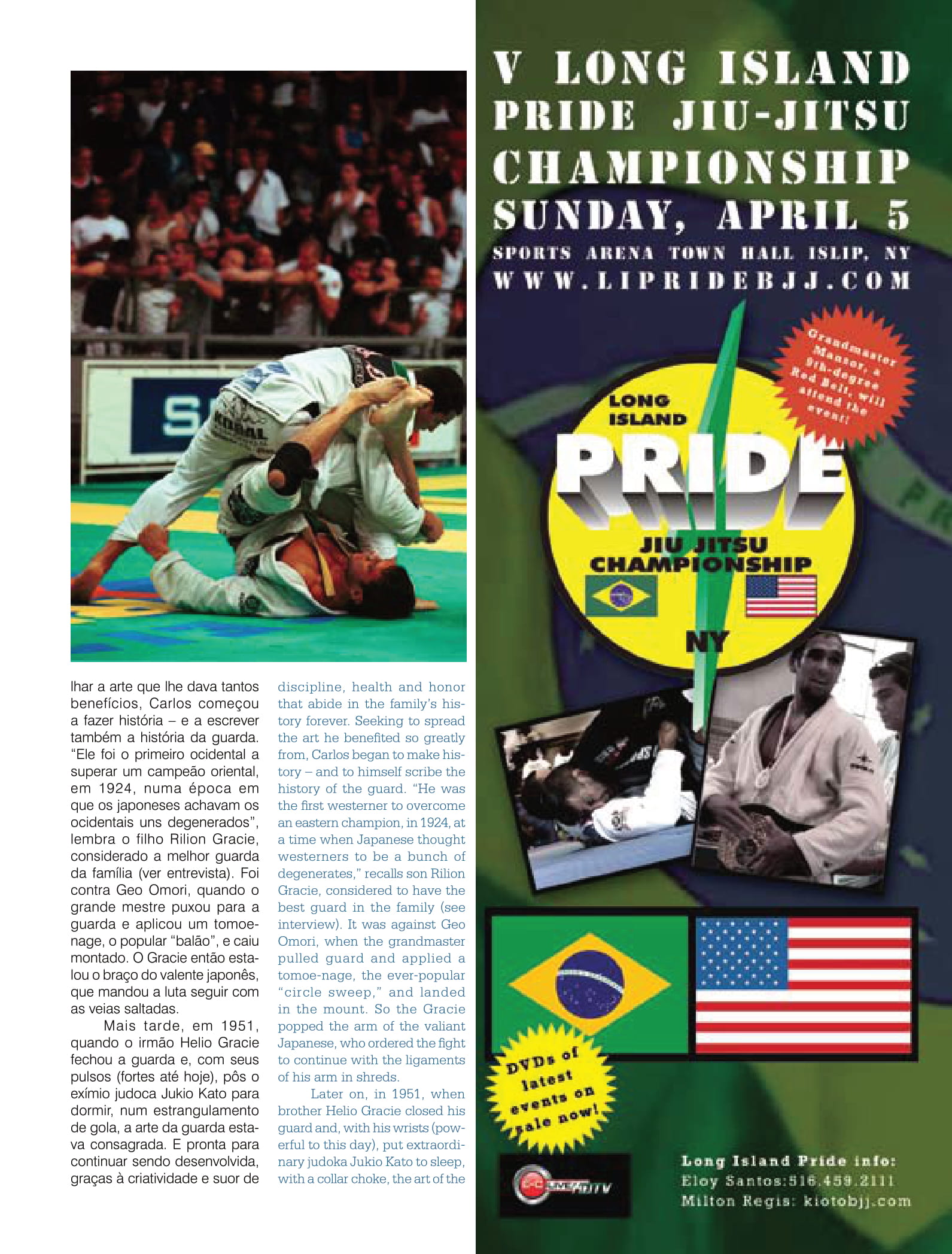 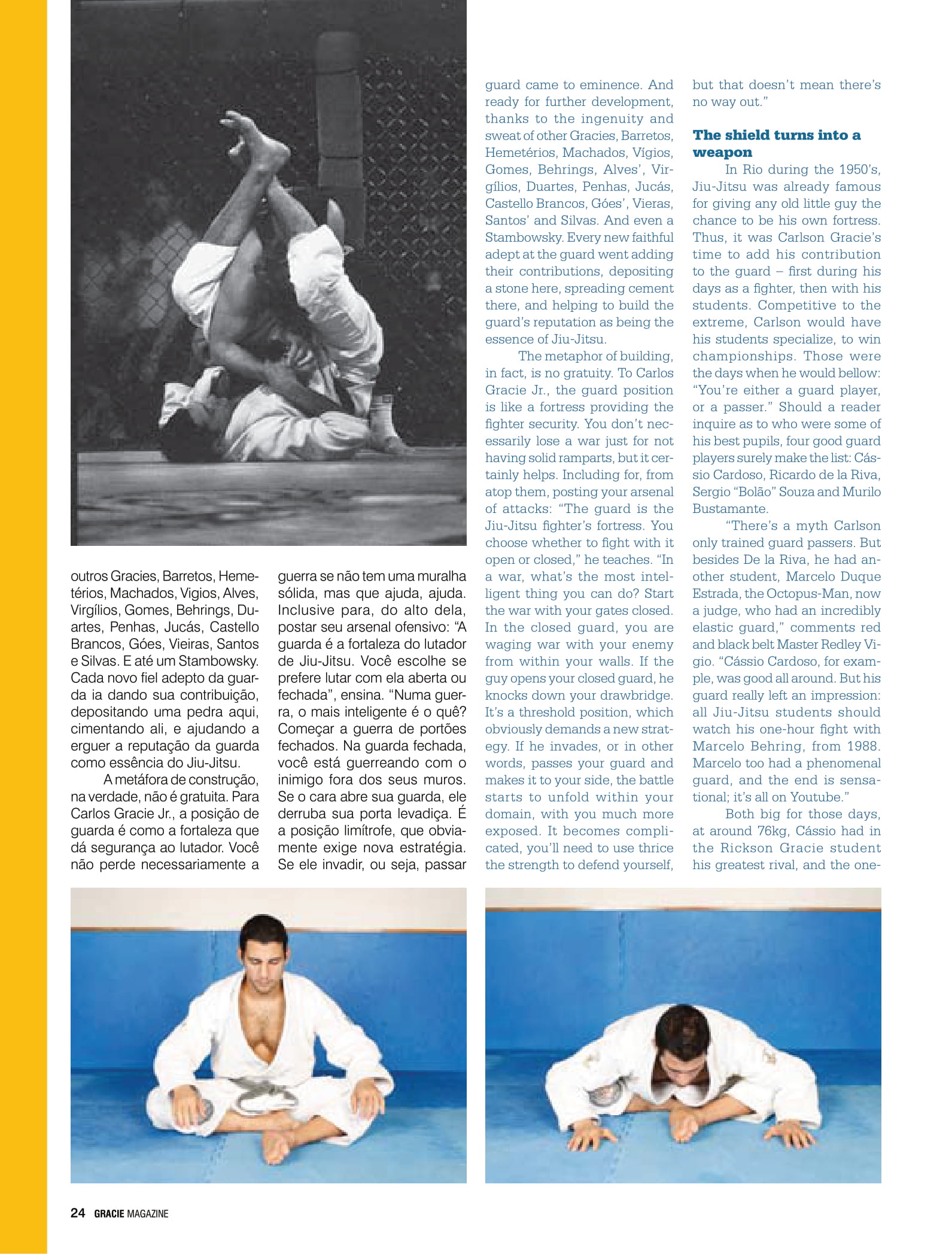 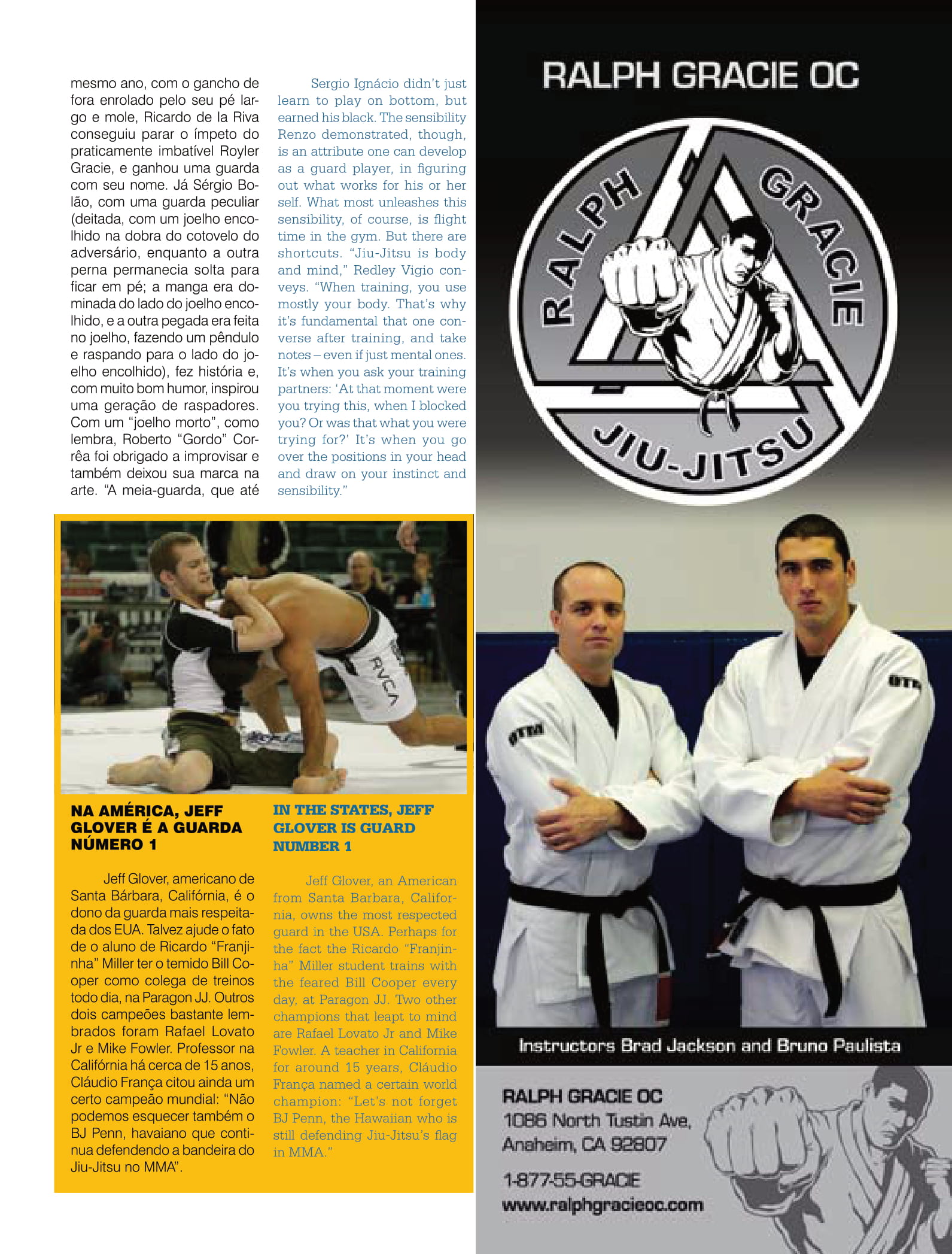 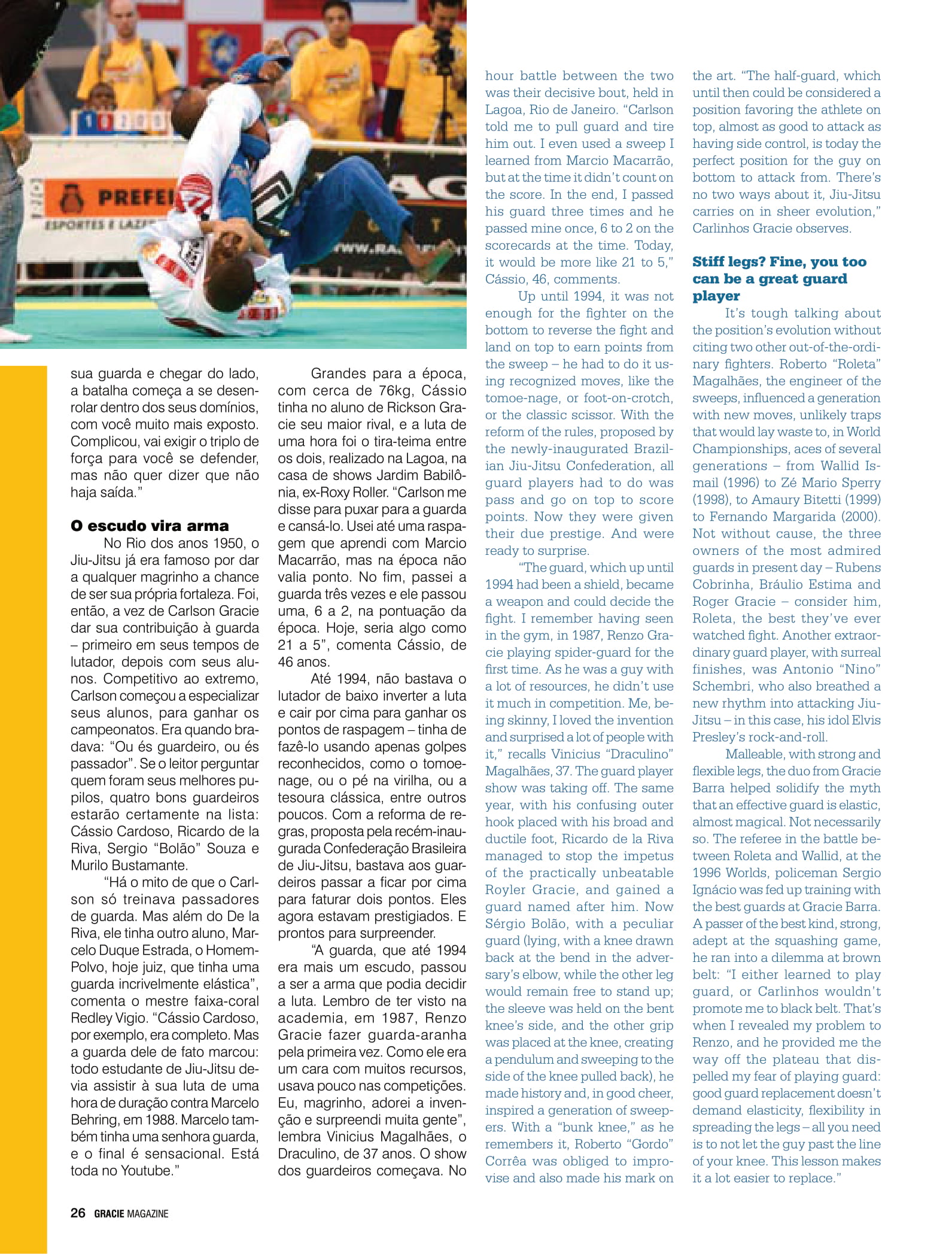 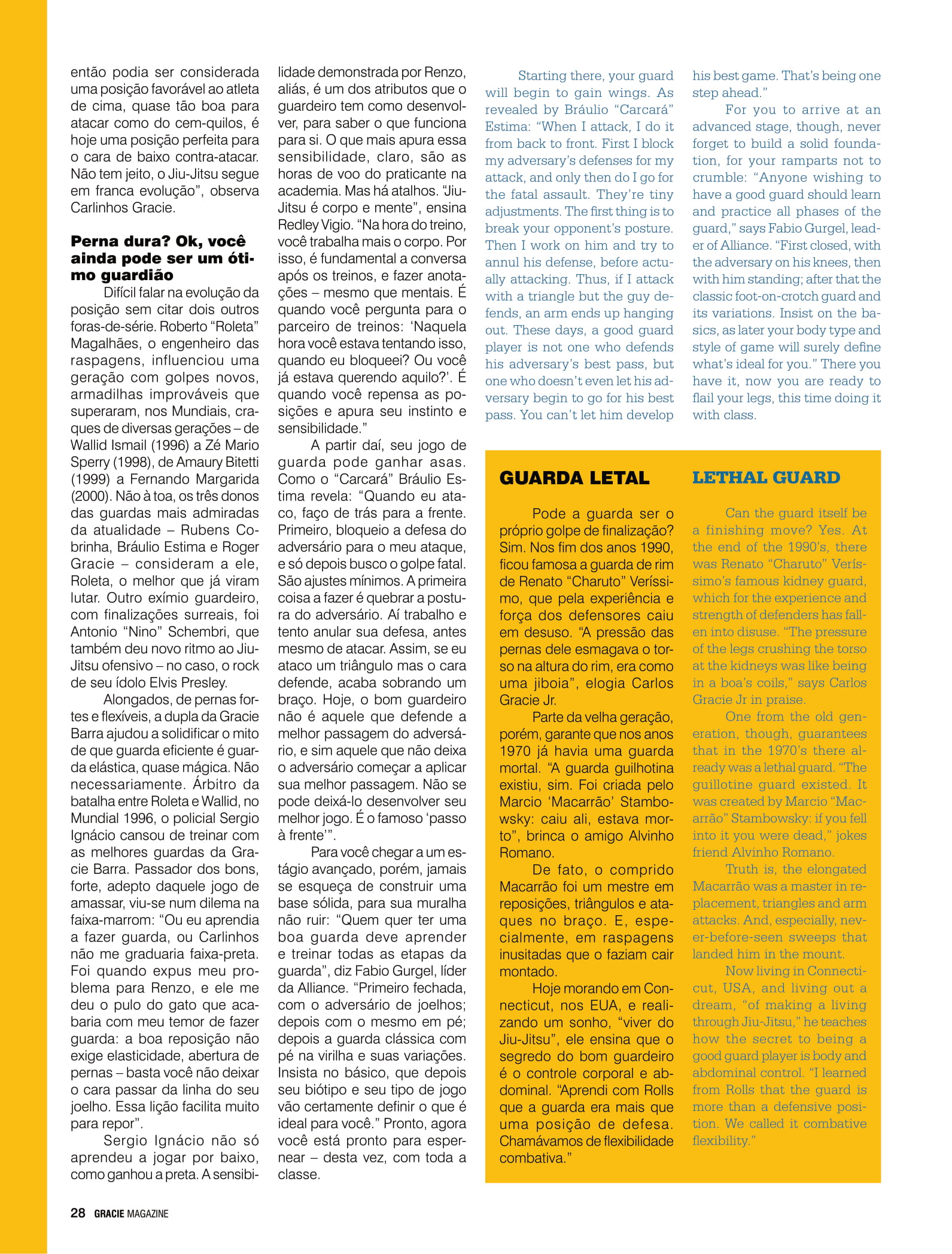 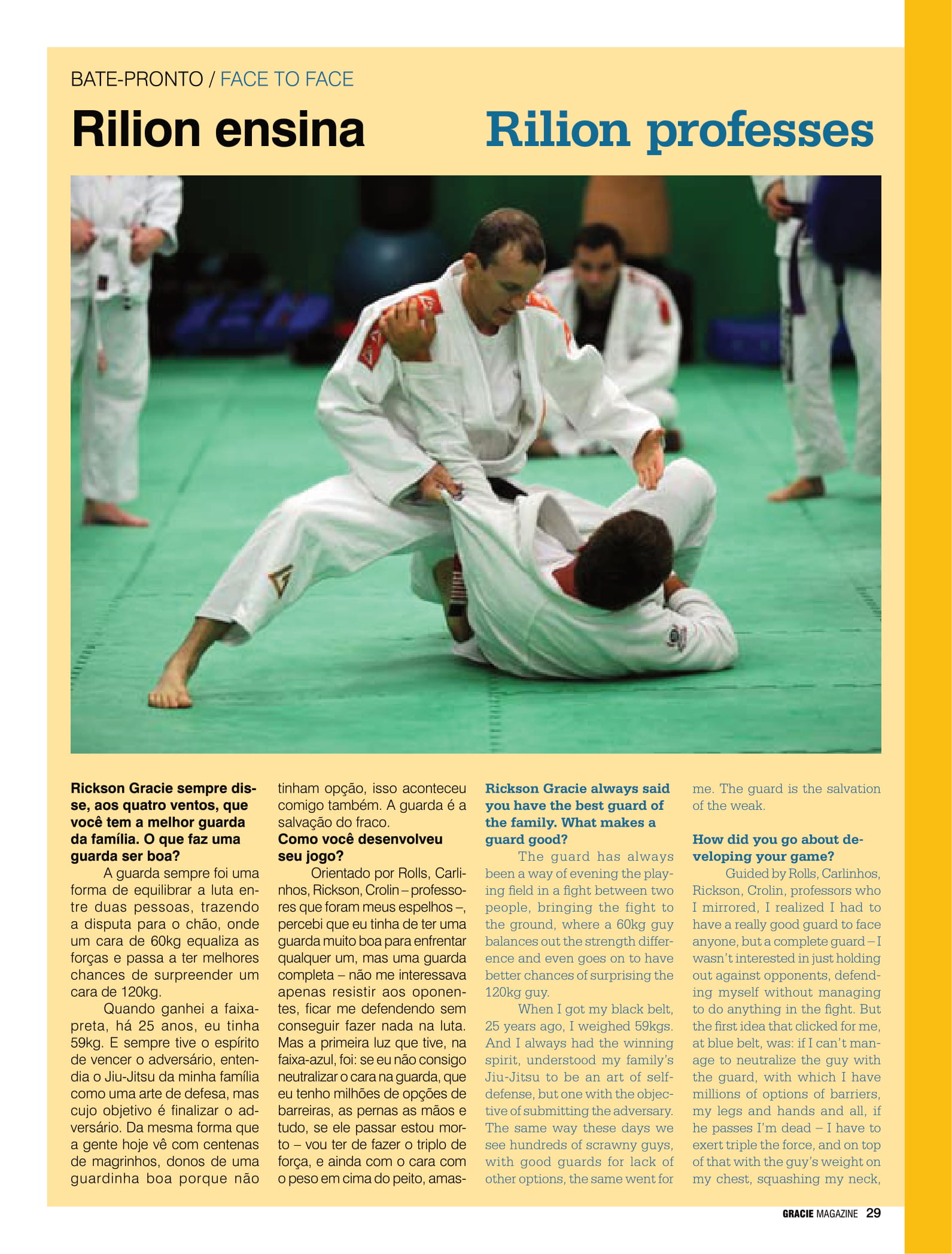 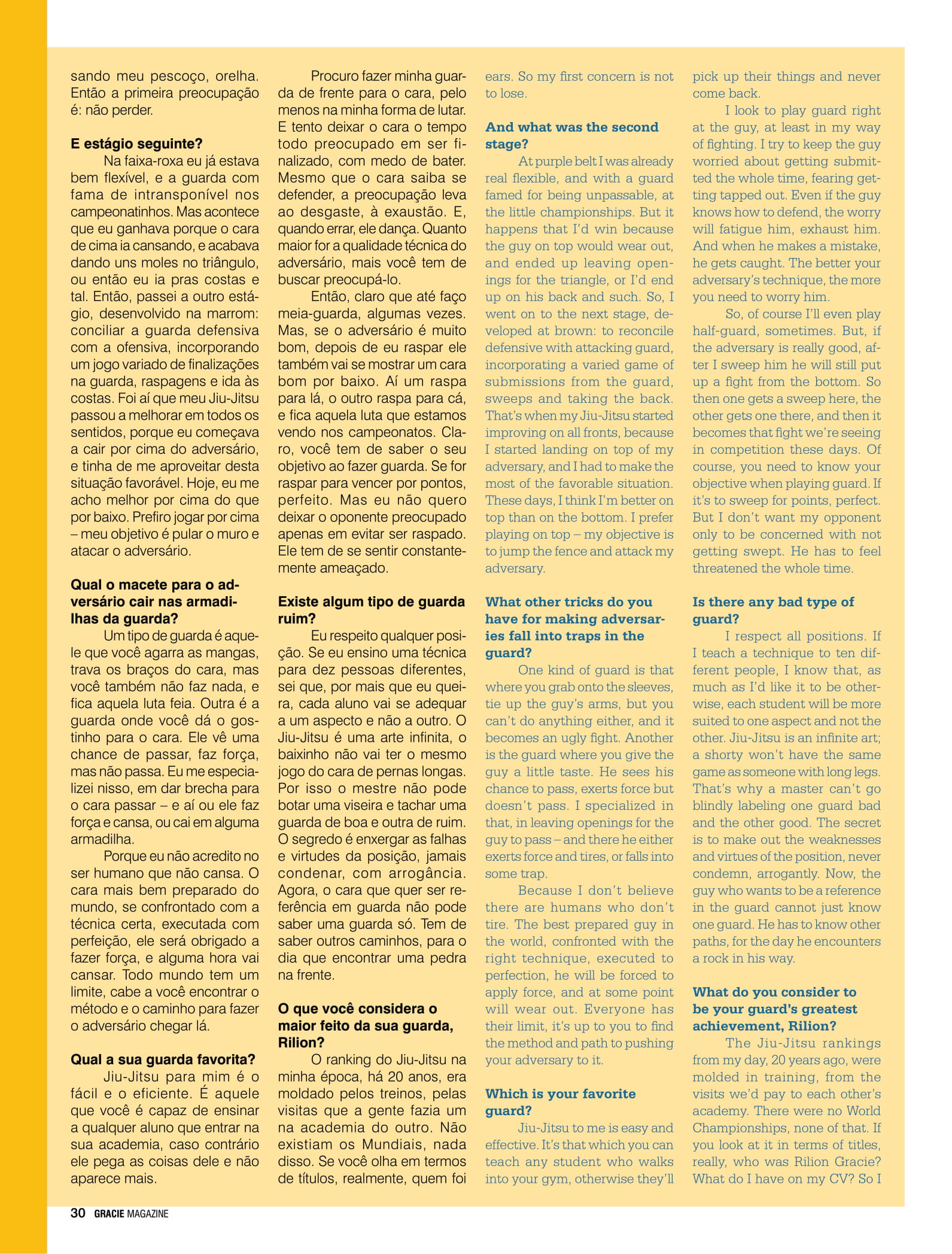 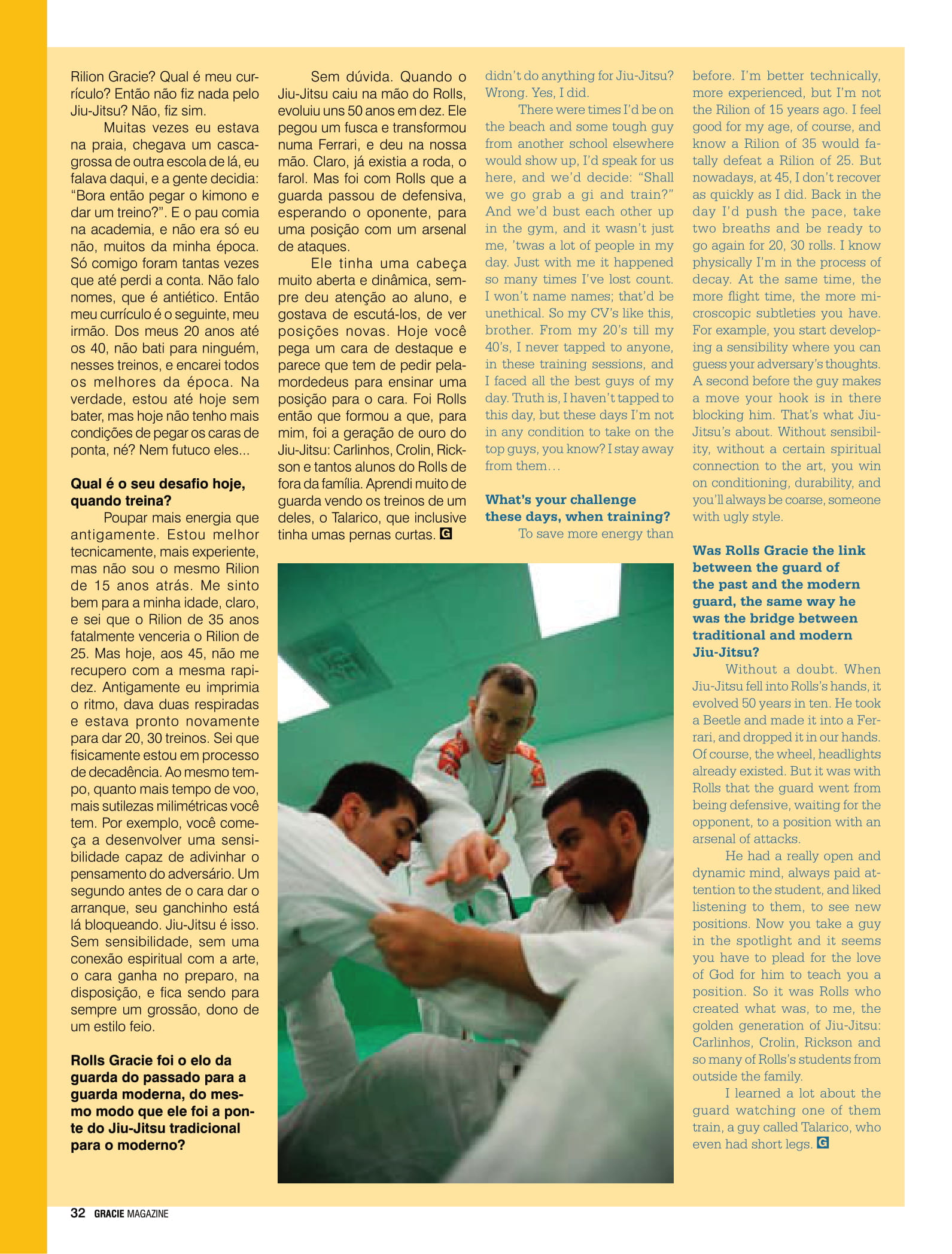 Yes, you don’t remember it, but you were born playing guard. If you stopped practicing it for awhile that’s your doing. After all, the position,
Jiu-Jitsu fighters’ eternal savior in the ring, has been
around for ages. Years. Centuries. Anyone to peer at
the oil-painting masterpiece “Fight at the Cock Inn,” by
Francisco Goya, can observe the following scene: a bar
fight, Spaniards beating each other with clubs all over the
place. At center canvas, a guy seems to have a superior
position… passing the guard! Well, you may need a little
imagination to see that.

Sergio Ignácio didn’t just
learn to play on bottom, but
earned his black. The sensibility
Renzo demonstrated, though,
is an attribute one can develop
as a guard player, in figuring
out what works for his or her
self. What most unleashes this
sensibility, of course, is flight
time in the gym. But there are
shortcuts. “Jiu-Jitsu is body
and mind,” Redley Vigio conveys. “When training, you use
mostly your body. That’s why
it’s fundamental that one converse after training, and take
notes – even if just mental ones.
It’s when you ask your training
partners: ‘At that moment were
you trying this, when I blocked
you? Or was that what you were
trying for?’ It’s when you go
over the positions in your head
and draw on your instinct and
sensibility.”

In the States, Jeff Glover is guard
number 1
Jeff Glover, an American
from Santa Barbara, California, owns the most respected
guard in the USA. Perhaps for
the fact the Ricardo “Franjinha” Miller student trains with
the feared Bill Cooper every
day, at Paragon JJ. Two other
champions that leapt to mind
are Rafael Lovato Jr and Mike
Fowler. A teacher in California
for around 15 years, Cláudio
França named a certain world
champion: “Let’s not forget
BJ Penn, the Hawaiian who is
still defending Jiu-Jitsu’s flag
in MMA.”

Lethal Guard
Can the guard itself be
a finishing move? Yes. At
the end of the 1990’s, there
was Renato “Charuto” Veríssimo’s famous kidney guard,
which for the experience and
strength of defenders has fallen into disuse. “The pressure
of the legs crushing the torso
at the kidneys was like being
in a boa’s coils,” says Carlos
Gracie Jr in praise.
One from the old generation, though, guarantees
that in the 1970’s there already was a lethal guard. “The
guillotine guard existed. It
was created by Marcio “Macarrão” Stambowsky: if you fell
into it you were dead,” jokes
friend Alvinho Romano.
Truth is, the elongated
Macarrão was a master in replacement, triangles and arm
attacks. And, especially, never-before-seen sweeps that
landed him in the mount.
Now living in Connecticut, USA, and living out a
dream, “of making a living
through Jiu-Jitsu,” he teaches
how the secret to being a
good guard player is body and
abdominal control. “I learned
from Rolls that the guard is
more than a defensive position. We called it combative
flexibility.”

Rickson Gracie always said
you have the best guard of
the family. What makes a
guard good?

The guard has always
been a way of evening the playing field in a fight between two
people, bringing the fight to
the ground, where a 60kg guy
balances out the strength difference and even goes on to have
better chances of surprising the
120kg guy.
When I got my black belt,
25 years ago, I weighed 59kgs.
And I always had the winning
spirit, understood my family’s
Jiu-Jitsu to be an art of selfdefense, but one with the objective of submitting the adversary.
The same way these days we
see hundreds of scrawny guys,
with good guards for lack of
other options, the same went for
me. The guard is the salvation
of the weak.

How did you go about developing your game?

Guided by Rolls, Carlinhos,
Rickson, Crolin, professors who
I mirrored, I realized I had to
have a really good guard to face
anyone, but a complete guard – I
wasn’t interested in just holding
out against opponents, defending myself without managing
to do anything in the fight. But
the first idea that clicked for me,
at blue belt, was: if I can’t manage to neutralize the guy with
the guard, with which I have
millions of options of barriers,
my legs and hands and all, if
he passes I’m dead – I have to
exert triple the force, and on top
of that with the guy’s weight on
my chest, squashing my neck
ears. So my first concern is not
to lose.

And what was the second
stage?

At purple belt I was already
real flexible, and with a guard
famed for being unpassable, at
the little championships. But it
happens that I’d win because
the guy on top would wear out,
and ended up leaving openings for the triangle, or I’d end
up on his back and such. So, I
went on to the next stage, developed at brown: to reconcile
defensive with attacking guard,
incorporating a varied game of
submissions from the guard,
sweeps and taking the back.
That’s when my Jiu-Jitsu started
improving on all fronts, because
I started landing on top of my
adversary, and I had to make the
most of the favorable situation.
These days, I think I’m better on
top than on the bottom. I prefer
playing on top – my objective is
to jump the fence and attack my
adversary.

What other tricks do you
have for making adversaries fall into traps in the
guard?

One kind of guard is that
where you grab onto the sleeves,
tie up the guy’s arms, but you
can’t do anything either, and it
becomes an ugly fight. Another
is the guard where you give the
guy a little taste. He sees his
chance to pass, exerts force but
doesn’t pass. I specialized in
that, in leaving openings for the
guy to pass – and there he either
exerts force and tires, or falls into
some trap.
Because I don’t believe
there are humans who don’t
tire. The best prepared guy in
the world, confronted with the
right technique, executed to
perfection, he will be forced to
apply force, and at some point
will wear out. Everyone has
their limit, it’s up to you to find
the method and path to pushing
your adversary to it.

Which is your favorite
guard?

Jiu-Jitsu to me is easy and
effective. It’s that which you can
teach any student who walks
into your gym, otherwise they’ll
pick up their things and never
come back.
I look to play guard right
at the guy, at least in my way
of fighting. I try to keep the guy
worried about getting submitted the whole time, fearing getting tapped out. Even if the guy
knows how to defend, the worry
will fatigue him, exhaust him.
And when he makes a mistake,
he gets caught. The better your
adversary’s technique, the more
you need to worry him.
So, of course I’ll even play
half-guard, sometimes. But, if
the adversary is really good, after I sweep him he will still put
up a fight from the bottom. So
then one gets a sweep here, the
other gets one there, and then it
becomes that fight we’re seeing
in competition these days. Of
course, you need to know your
objective when playing guard. If
it’s to sweep for points, perfect.
But I don’t want my opponent
only to be concerned with not
getting swept. He has to feel
threatened the whole time.

Is there any bad type of
guard?

I respect all positions. If
I teach a technique to ten different people, I know that, as
much as I’d like it to be otherwise, each student will be more
suited to one aspect and not the
other. Jiu-Jitsu is an infinite art;
a shorty won’t have the same
game as someone with long legs.
That’s why a master can’t go
blindly labeling one guard bad
and the other good. The secret
is to make out the weaknesses
and virtues of the position, never
condemn, arrogantly. Now, the
guy who wants to be a reference
in the guard cannot just know
one guard. He has to know other
paths, for the day he encounters
a rock in his way.
What do you consider to
be your guard’s greatest
achievement, Rilion?
The Jiu-Jitsu rankings
from my day, 20 years ago, were
molded in training, from the
visits we’d pay to each other’s
academy. There were no World
Championships, none of that. If
you look at it in terms of titles,
really, who was Rilion Gracie?
What do I have on my CV? So I
didn’t do anything for Jiu-Jitsu?
Wrong. Yes, I did.
There were times I’d be on
the beach and some tough guy
from another school elsewhere
would show up, I’d speak for us
here, and we’d decide: “Shall
we go grab a gi and train?”
And we’d bust each other up
in the gym, and it wasn’t just
me, ’twas a lot of people in my
day. Just with me it happened
so many times I’ve lost count.
I won’t name names; that’d be
unethical. So my CV’s like this,
brother. From my 20’s till my
40’s, I never tapped to anyone,
in these training sessions, and
I faced all the best guys of my
day. Truth is, I haven’t tapped to
this day, but these days I’m not
in any condition to take on the
top guys, you know? I stay away
from them…

What’s your challenge
these days, when training?

To save more energy than
before. I’m better technically,
more experienced, but I’m not
the Rilion of 15 years ago. I feel
good for my age, of course, and
know a Rilion of 35 would fatally defeat a Rilion of 25. But
nowadays, at 45, I don’t recover
as quickly as I did. Back in the
day I’d push the pace, take
two breaths and be ready to
go again for 20, 30 rolls. I know
physically I’m in the process of
decay. At the same time, the
more flight time, the more microscopic subtleties you have.
For example, you start developing a sensibility where you can
guess your adversary’s thoughts.
A second before the guy makes
a move your hook is in there
blocking him. That’s what JiuJitsu’s about. Without sensibility, without a certain spiritual
connection to the art, you win
on conditioning, durability, and
you’ll always be coarse, someone
with ugly style.

Was Rolls Gracie the link
between the guard of
the past and the modern
guard, the same way he
was the bridge between
traditional and modern
Jiu-Jitsu?

Without a doubt. When
Jiu-Jitsu fell into Rolls’s hands, it
evolved 50 years in ten. He took
a Beetle and made it into a Ferrari, and dropped it in our hands.
Of course, the wheel, headlights
already existed. But it was with
Rolls that the guard went from
being defensive, waiting for the
opponent, to a position with an
arsenal of attacks.
He had a really open and
dynamic mind, always paid attention to the student, and liked
listening to them, to see new
positions. Now you take a guy
in the spotlight and it seems
you have to plead for the love
of God for him to teach you a
position. So it was Rolls who
created what was, to me, the
golden generation of Jiu-Jitsu:
Carlinhos, Crolin, Rickson and
so many of Rolls’s students from
outside the family.
I learned a lot about the
guard watching one of them
train, a guy called Talarico, who
even had short legs.