Outside his comfort zone, Léo Silva predicts win in first fight as a black-belt 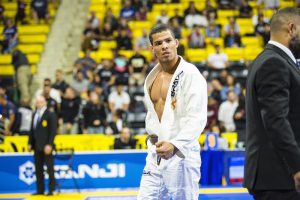 Leonardo Silva, 25, will be doing his first match as a black-belt this Friday, August 30, in Sacramento, Calif.

At Fight to Win (F2W), the GFTeam athlete will be fighting Breno Bittencourt, who represents Ares BJJ and has 50 fights as a black-belt, with 30 wins and 20 losses, according to BJJ Heroes. The duel will be ten minutes long, submission-only, with no points counted.

Leo analyzed his opponent going into the match. “I heard he’s tough and respected,” said the student under Gutemberg Pereira. “He has a victorious career in the black belt. It will be a great fight and I’ll give it my best to represent my team and honor everyone who goes to the gymnasium to see the tournament.

“The mistake you cannot afford to make in a no-points fight is to lean on this thing of there being no points — relaxing and seeking the submission only at the end. You have to seek out the positions, regardless of whether there are points or not, be aggressive in the positions and at one point have control over the opponent. From defending so much, he will open up some space, a space for you to be able to finish. You have to find the space between passes, sweeps to finish.”

With under a month as a black-belt, the young fighter hailing from Rio de Janeiro is confident, adding: “I’ve been training plenty outside my comfort zone. These days I train a lot on top and bottom so as not to have any weak points in my game. At my school I have a very good environment, with tough athletes who have won the biggest titles in the sport. I get confident because I train with good athletes and my mind gets stronger because of this. I’m confident to show what I’ve been learning.”

Check out Leo’s style in BJJ: