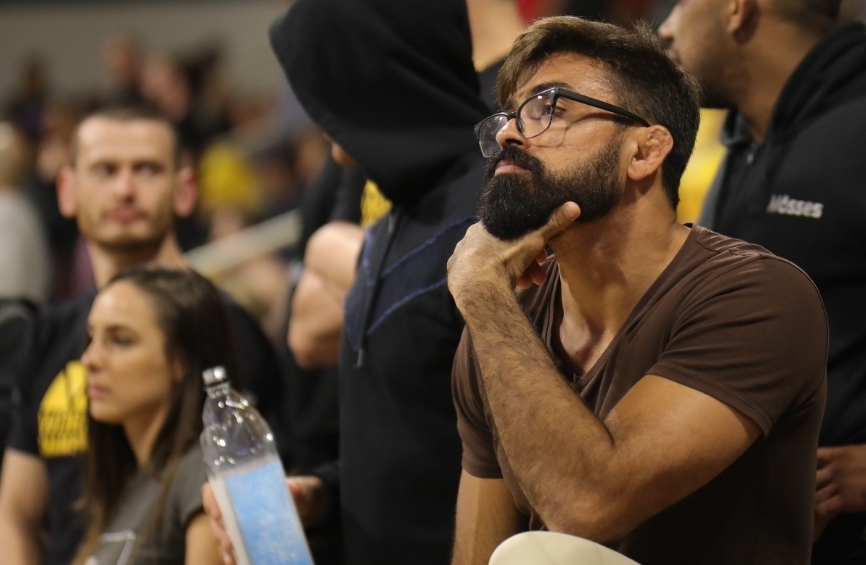 Considered to be one of the best coaches in BJJ worldwide, Mario Reis details, in the following interview, how he thinks and works with his champion athletes, who helped push Alliance to another teams’ world title in 2019.

GRACIEMAG: Mario, you are renowned in the BJJ world for your talent for motivating people. But who motivates you? Who motivates the motivator?

Mario Reis: The people who motivate me are precisely the ones I motivate. There is a magical exchange between us, and this fills me with a certain vibe. I feel really very happy when I notice someone’s state of mind get altered positively through my work. This motivates me a lot to keep going.

The coach gains a lot of visibility when we’re talking about the training of a top athlete. But what about the normal student? How do you motivate them?

I think the secret is stimulating the normal student to reach little goals at all times. I have the feeling that one of the strongest pleasures that exist is that of triumph. Triumphs of any dimensions — that doesn’t matter. I offer common students the chance to evolve in small, although very gratifying, steps. Be it the perfecting of motor coordination, be it improving their stamina, their energy. Whether they are a person who started the session in a bad mood and finished the class in a fantastic mood. What I seek as a teacher is to make my student feel in constant evolution, feel appreciated, feel like an explorer, someone who advances at a slower clip than a great champion, but who is always moving forward, willing to take on small challenges constantly in my classes. They need to feel constantly challenged. They will enjoy little victories and won’t run the risk of suffering a big frustration for trying to take on the same challenges as a champion has to face to become, for example, a gold medalist at the IBJJF’s Worlds.

“Love” is a word often heard in the documentary Building Champions, available in Portuguese on YouTube. What role does love play in the building of a BJJ champion?

I have great faith in love. My students have to understand how important their training partners are. How important their rivals are. You simply cannot be selfish in relation to this; a champion needs others and must respect this fact. The more one person strengthens the next, the more we enrich the whole. One takes care of the other. Now, on the other hand, nobody can give something they don’t have. I can’t give love to my neighbor if I don’t have love for myself. So I really believe in this need to extoll love in every form. A champion will only evolve to the highest level and stay there for a long time, at the top, if they have this type of perception.

You say that at certain points in your career as a competitor, you felt that “your flame was getting weaker.” So it was necessary to stoke it anew. Can you tell us about one of those moments?

Everybody’s state of mind oscillates — no way around it. As levelheaded as you may be, it’s necessary to accept this truth. But I don’t see that as a negative thing. On the contrary. Challenges and adversity are in our life to make our victories fun. There is no true happiness if there isn’t some moment of difficulty along the way. It’s normal for people to make mistakes, get frustrated, get deflated… But it is the willpower to turn things around that’s going to glorify the victory that has yet to come. When things didn’t happen the way I wanted, I’d try to overcome the frustration of that moment by seeking out some lesson, something that would cause me to evolve and come back stronger. Once I injured myself days before a championship and was devastated. But then came a reflection: “Mario, you have never competed while injured. What do you say we experience this now?” And so that championship was my first title in the black belt, the most memorable championship in my career. And — look how funny — just days before, I was completely sad and deflated.

Many athletes say that before they met you, they thought you were full of yourself as a competitor — a comment also heard often about the pre-fight moment of your student Nicholas Meregali. Then, after they get to know you as a friend, they say there’s nothing arrogant about you.

When we are about to compete, our instinct is right on the surface. I’m a true believer in hunger, you know? Anger in the positive state, something i used to pull a lot of out of me and try to turn into maximum courage, the most powerful energy possible to seek out my goals in very challenging fights. I’d evoke that, a certain appetite, an obstinacy to travel a path of great sacrifice until the top. Anyway, all of this pre-fight emotional state would manifest with a perhaps kind of aggressive facial expression. But it was never anything in the sense of wanting bad things to happen to my opponent. I wanted to beat him and couldn’t afford to worry about taming that expression. I was something spontaneous. It wasn’t fabricated. I needed to let it surface, even if it seemed ugly or arrogant. I simply couldn’t worry about what others were thinking — I was just 100% focused on winning.

What are the most recurring types of self-sabotage you see in BJJ fighters?

I think the main mechanism of self-sabotage is blaming others, attributing to others all of the failures and problems in your life, thus running away from the responsibility regarding the facts.

You often say that the work done at your gym is different. How so?

I don’t like saying that it’s better or worse; after all, there are so many wonderful professionals in BJJ. They all have their worth — it would be a wrong comparison. But I like to think that the work I’ve been doing here in the South is different. I strive to work a lot with the students’ emotions, in order for the fighters to always achieve the best versions of themselves according to the environment they are in — be it at the gym, at a championship, at home, at a party, and so on. I really care a lot about the human being behind the student, you know? BJJ exposes people’s personality, and an attentive coach has access to these behaviors and can work to perfect them. I strongly associate this work with the technical part. I think that’s our biggest difference.

What advice do you have for athletes approaching retirement who want to transition into a successful career as a coach?

First is accepting that now, as coach, the former athlete stops being the protagonist of the story. It’s important to understand this, accept this and like that that’s the case. Otherwise the coach starts competing with their own student, which is a terrible mistake. Well, regarding the dynamic of the work with the students, I believe the coach must initially concern themselves with getting to know, deeply, the dreams and fears of each student. When the coach clearly identifies that, they are able to lay out efficient strategies so that the students can reach all their goals.