João Gabriel on sitting out Worlds, beating the odds at King of Mats 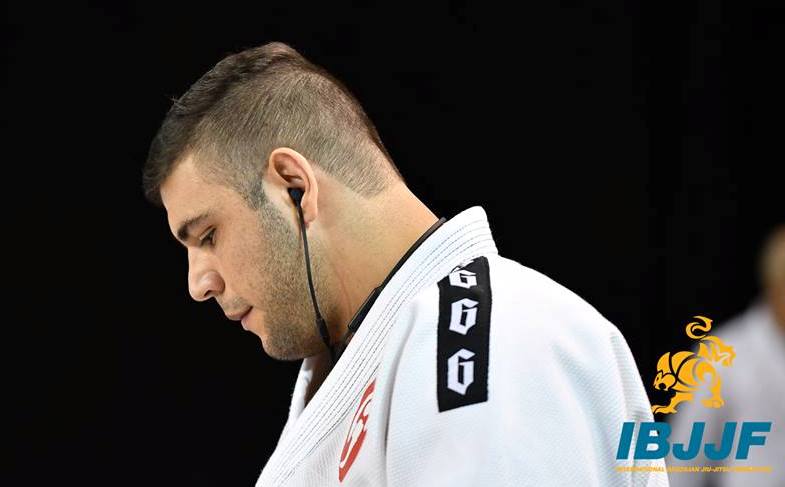 Imagine, if you will, preparing for an entire year for a tournament and then being forced to skip it. It would be a big hit to anyone’s morale, and João Gabriel Rocha drew the short straw in this regard this year. An intestinal infection removed the Soul Fighters star from the 2019 Worlds — a hard blow he explained to Graciemag exclusively.

“I went to eat some pasta one day prior to the World Championship,” he said. “My wife is a doctor in Nutrition, and she told me to eat pasta. It was around 5 or 6 p.m., and I was returning to the hotel after eating. Since I didn’t want to leave around 10 to eat again, and in California there’s nothing but fast food when it gets late, I ended up going to a market next to the restaurant where I ate that pasta. I bought pre-made sushi, and it just destroyed me. I woke up in the predawn puking buckets, and this process went until around 8 a.m., until my wife went to the drugstore to buy medicine to improve the situation. I stopped throwing up, but my body was busted; I couldn’t walk straight from dehydration. This was four or five hours before fight time, so I chose not to fight.”

Sitting out the tournament clearly rocked João. Compounding the problem was the fact that he wouldn’t have time to absorb the blow: In one week he was already traveling to Russia on his way to King of Mats, organized by the AJP. Still weak, both physically and psychologically, João decided to go, and his armored champion’s mind, which had gone through its share of trials, put him back on his feet. Victory smiled on him in Moscow as he recovered from a defeat to Kaynan Duarte and met him again in the final. To understand this episode better, we dove deep into João’s month of highs and lows, and how his mind worked through it all may be the key to get you past your own hurdles.

“I was very disappointed with the Worlds thing,” he said. “I was well trained, doing really great. I thought of giving up on fighting at King of Mats — it was one week after the Worlds and I’d already have to travel again. I didn’t train properly; I managed to train three times in those 14 days. Three BJJ sessions and none of physical preparation. I brought in my suitcase only my competition experience and got excited on the way. Upon arriving in Russia, I was already in the right mood to compete, and, fight after fight, I gained more confidence. It wound up working out.”

About the campaign, albeit victorious, João pointed out that he didn’t have the best performance. The difference between fighting well and winning is still a mystery to him. It’s far from an exact science.

“Sometimes we win and don’t have a good performance. Sometimes we fight tremendously well and don’t win — the result doesn’t come. To this day I don’t know what’s better. Their format is very difficult, one tough fight after the other. Your physical preparation has to be up to snuff.”

Regarding his toughest opponent in the competition, Kaynan Duarte, João said he was ready for war, but without having deep knowledge of his opponent, and that almost cost him the title.

“I did two fights with Kaynan and, without dismissing the others, I thought he could be the toughest fight, especially because he eliminated Leandro Lo one week earlier, at the Worlds. His campaign was very good in Long Beach. In the first duel, I tried to impose my game against him. I wanted to let loose all I have, and that’s what I did. Right at the start I achieved the takedown and nearly passed. He swept me and I swept back, landing on his back, placing the hooks. I was doing well in the fight, winning on points, with under two minutes to go. I could have coasted, but my absence from the World Championship made me very hungry for a fight — I sort of poured all that on that moment. I wanted to show I was doing well, that I could have had the best campaign of my life in California. What I did was come up holding his leg. I didn’t know — I don’t watch my opponents’ matches, a flaw of mine — and later I learned that he pulls a mean guillotine from that position. I landed with the technique already locked in place. I even think I tapped too fast. I could have given him the sweep, but I tapped and was feeling really bad at the time. But I couldn’t afford to get shaken — I had to go back for the rest of the tournament.”

Following the wipe-out, again the champion’s mind was summoned. Time to raise that sand-covered head, take a deep breath and dive back in, paying more attention.

“In the following fight, I faced Igor Silva and beat him. Then I faced Jackson Sousa and finished him. I became very focused after the first loss. In the semifinal round I faced Jonnatas Gracie, a new kid who arrived recently at the black belt and gave me a tough fight. I slipped trying to pass his guard and he attacked my arm. I managed to escape and win the fight.”

This attack on the arm made the rounds on social media. The very well-applied move again could have jeopardized João’s title, and the details of his escape — a harmonious mix of technical coldness and crudeness — were the keys to success.

“It was a bit of both. In the move, I didn’t let him pass the leg over my head, so he had to cross one leg on the other to isolate just my arm. Thus there wasn’t as much pressure as in a traditional armbar. My strategy was to hold the leg to spin and come up — it’s easier without the weight of the leg. He turned belly down and squeezed the lock even more. It was working, but there was no danger of breaking or anything like that, also because he is much lighter than I. If it were someone heavier, I’d have a harder time getting out. It was a matter of strength and weight at that moment, but certainly my technique helped a lot preventing him from adjusting the lock better.”

After making it through the semifinal round, it was time to take on Kaynan again. João’s experience was decisive.

“I didn’t want to make the same mistake as the first time. I went in as calm as possible, slowing things down. He was also wary of attacking; he was defensive. He called me to the 50/50 and in the end tried to come up. I succeeded in taking the leg out and get on his back standing. I didn’t conclude the takedown because the time ran out, but the advantage was good for the win. I used experience to my advantage, being very tired. Those two weeks light on training made me lacking in stamina when it was required.”

In the final balance, as well as the title and prize money, as well as the chance to face Erberth Santos for the King of Mats heavyweight title, João left Russia with another important lesson — another tournament where his willpower had to be even greater.

“This championship was the epitome of tenacity to me, especially on the psychological side. When a high-level athlete like me, who always goes in to become champion, never just to fill the podium, goes to a tournament like the Worlds and can’t fight, has to wait a year to try again, this makes you very upset, and you end up not performing well later. Having a competition like this one right after, with multiple guys who were even champions at the Worlds, demanded a lot more focus out of me. At times, your biggest weapon is your willpower.”