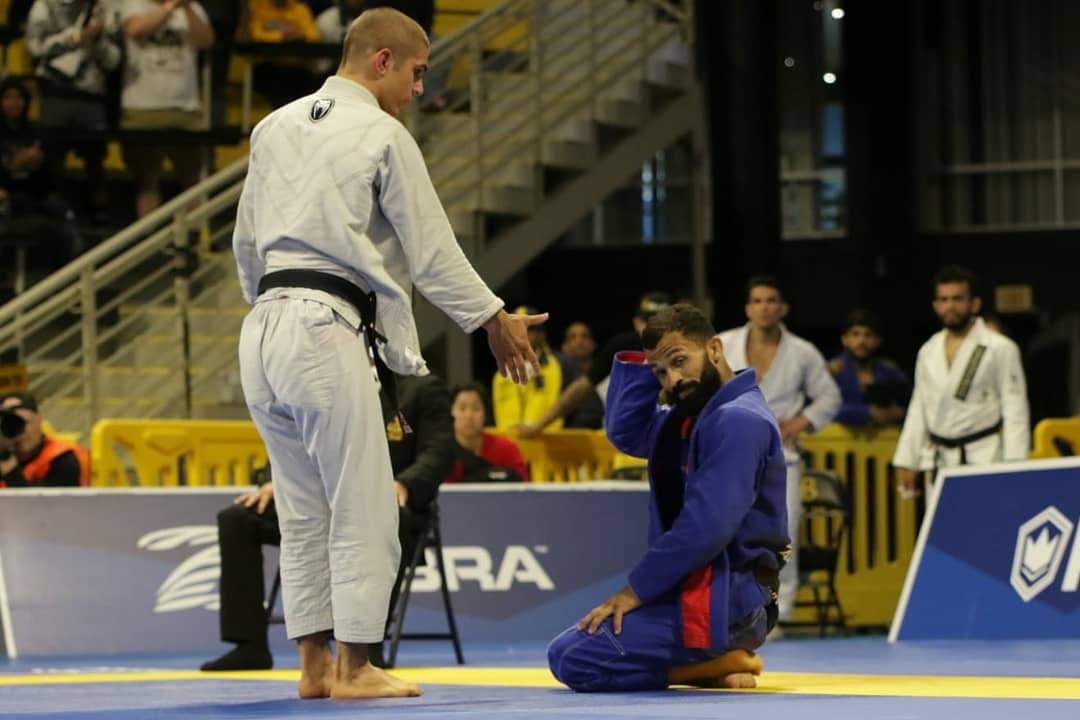 Musumeci extends his arm and gets the handshake denied by Malfacine. Blanca Marisa Garcia

With three world titles across two weight divisions, Mikey Musumeci this year put his name side by side with the likes of Leandro Lo, Saulo Ribeiro and André Galvão. The campaign of the 22-year-old American at this year’s World Jiu-Jitsu Championship was impeccable, ending with a 12-second submission win over Rodnei Barbosa for the roosterweight crown. But there was a lot more going on in the division — a tale of Musumeci’s origins, in fact.

The semifinal round saw Musumeci take on Bruno Malfacine, who was returning from his announced retirement, in 2018, to again compete for the roosterweight title. With a score of 10-8, Musumeci beat his idol, later offering him a handshake. Malfacine declined it at the time. (See it here.)

Hours later, Malfacine told his version on social media, explaining that not shaking Musumeci’s hand was for a reason other than being eliminated.

“It’s personal issues. Mikey and I will talk in private,” Malfacine wrote on Instagram. “I expect more from myself and just let my emotions control me in that moment and I apologize for the awful behavior.”

To better understand the situation, Graciemag spoke with Musumeci, and he exclusively revealed a pact he had made with Malfacine a few years back. Here’s what he had to say:

“Man, fighting Bruno was one of the hardest things I had to do, because he was an instructor of mine when I was a kid. Like, I didn’t train at his gym; his gym was about 4 and a half hours from my house. But I used to take private lessons from him, and he was my biggest idol when I was a little kid. So competing with him was very, very difficult for me.

“The last three years, I did the light feather division out of respect for him, because he was in the roosterweight division, and out of respect for him I said, ‘Okay, Bruno, I’ll do light feather, and when you retire, I’ll fight in the roosterweight division.’ So we were set to do that. He retired last year, and he told me he wasn’t gonna do roosterweight this year; he was gonna focus on MMA. But then, last second, he signed up to fight roosterweight, and I was already dieting and everything for roosterweight. So I didn’t wanna move up to, like, feather. And he didn’t tell me he was fighting, so we ended up competing. So for me it was very hard to handle my emotions and keep composed during that match.

“I felt like I wasn’t even, like, fighting how I would normally fight, because I felt almost bad fighting with him, just because I cared about him to a certain extent. It was a hard situation. I’m very grateful that I ended up winning that match, but if you ask whether I was happy about the match, not really, because it was more sad fighting than happy.

“I think the handshake incident was just, he got emotional as well, and he was just upset with the match. And he’s a legend. He’s done a lot for jiu-jitsu, for me — he’s inspired me a lot. So I have so much respect for him… And I don’t think we should take one incident to view him as a whole.”